Founded in 1835, Oglethorpe University unites a close-knit campus community with big-city culture and opportunities. Today, the university enrolls 1,385 students, representing 37 states and 30 countries. Oglethorpe University is also ranked 33rd among America’s most entrepreneurial colleges, 48th out of 1,223 for “Best Value” nationwide, and 56th out of all liberal arts colleges in the nation for their contribution to the public good.

After successfully creating various pages of their website, Oglethorpe University challenged us to help increase national awareness advertising campaigns for their “Flagship 50” program. Flagship 50 incentivizes out-of-state students to enroll at Oglethorpe University by matching their in-state tuition. We set out to create dynamic ads that changed state-by-state to match the corresponding tuition rates.

We started with a goal: present the audience with their state’s flagship university tuition cost, educate them on what Flagship 50 is, and introduce them to Oglethorpe University, all while piquing their interest and getting them to engage with the ad.

Our designers created brilliant rich media, display, animation, and video ad units that include dynamic changes such as state, tuition amount, and average class sizes per state. We also utilized our partners at StackAdapt & GumGum to create additional ad variations to gain even more brand visibility. 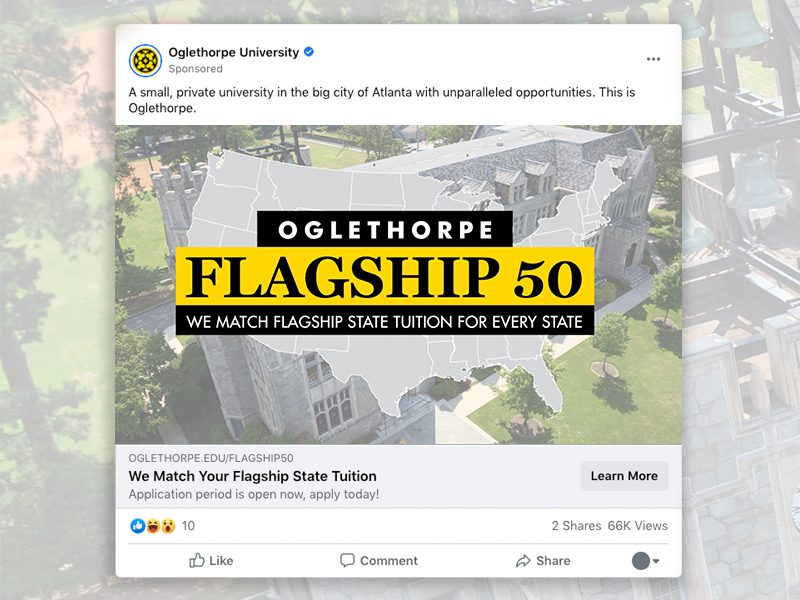 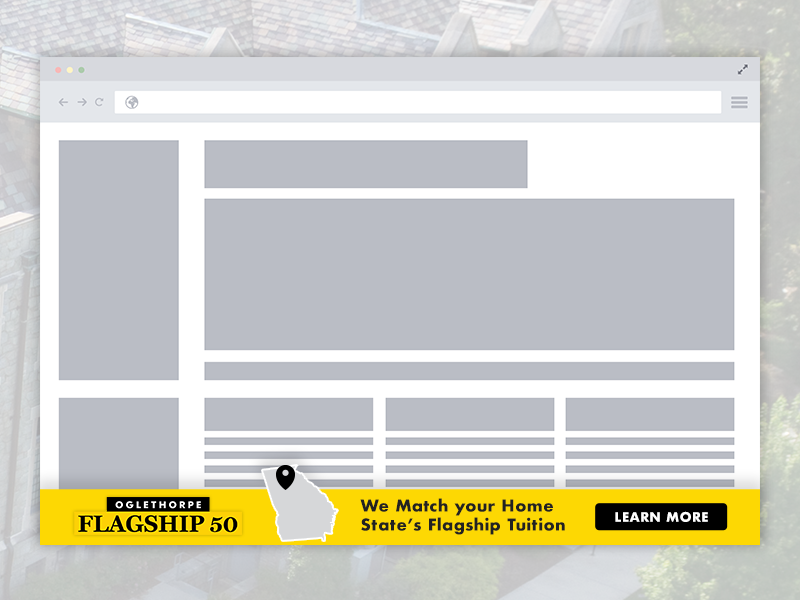 Last year was a record year for enrollment thanks to the Flagship50 campaign!

Vice President for Marketing and Communications at Oglethorpe University

Who knew how awesome Oglethorpe University was? Well, we did, and now a LOT of others do, too. Due to the success of this campaign’s initial launch, we’ve continued to launch optimized versions for four consecutive semesters. The data proves that by consistently testing ad formats, creative, copy, audiences, and new media partners, we’ve gotten more and more efficient each semester! Since its initial launch, the university has seen a 49% increase in enrollment from out-of-state students through Flagship 50. This project continues to pave the way for future dynamically creative campaigns! Last year was a record year for enrollment thanks to the Flagship50 campaign; completed applications are up 40%, accepted students up 44%, and Flagship 50 accepted students are up 43% over last year!

AJC: Georgia university offers to match tuition of some of nation’s top colleges

WSJ: In Race for Students, Colleges Offer to Match Tuition at Rival Schools

Yahoo Finance: To compete for top students, colleges have borrowed a tactic retailers have been using for years